As we move forward under this initiative, we will embark on several informational and educational activities, for both our employees and members of the general public, so that they can improve their knowledge and understanding in this area. We will also undertake several relevant projects that will involve our staff and showcase their knowledge.

Throughout this site, we have included summaries and scholarly papers on several topics related to Carbon Net Zero. This is to give you, our visitors, broad overviews of each topic and hopefully encourage you to actively pursue more information on all things Carbon Net Zero.

We hope you enjoy our site and look forward to your participation and feedback.

To get in touch with a KCNZCP representative, please send an email to kcnz@kenson.co.tt

Since the 1880’s fossil fuels have been the primary source of energy used by humans for the creation of heat, work and electricity.

In recent years, however, it has become apparent that fossil fuels are not a sustainable primary source of energy in the long-term. These fuels are considered “non-renewable” as they must spend millions of years being formed in the Earth’s crust before being available in the forms described above. Moreover, the combustion of fossil fuels results in the emission of gaseous by-products known as greenhouse gases. These greenhouse gases modify the composition of the Earth’s atmosphere giving rise to a “greenhouse” effect, from which they derive their name. Radiation from the sun warms and is reflected off the Earth’s surface, and heat is then trapped by this insulating layer of gas, subsequently resulting in rising temperatures (See Figure). This phenomenon is known as global warming. 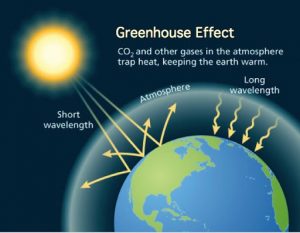 Towards the end of the 20th century, the threat imposed by rising temperatures and the associated climate change was identified and since then has had a growing profile internationally. This represented a truly global dilemma, which must in turn be addressed on a global scale. In 2016, the world saw the first united approach to combatting global warming with 196 countries signing the Paris Agreement. This international treaty sought to enact measures seeing a move towards a global “carbon net zero”. Carbon net zero refers to balancing the amount of emitted greenhouse gases with an equivalent mean that will offset or sequester the same amount. The goal of the initiative is to work towards remedying the current worldwide energy practices which have given rise to the unprecedented global warming and climate changes witnessed over the preceding decades. The Paris Agreement sets a long-term temperature goal of limiting the rise of global temperatures to well below 2 degrees Celsius.

The demand for fossil fuels has exponentially increased to subsist constantly rising human productivity (See figure). However as previously explored this is not sustainable in the long-term and a simple solution to this is to reduce unnecessary demand for fossil fuels by implementing Energy Conservation. This can be defined as the process of achieving the same work output utilizing methods that require less energy. 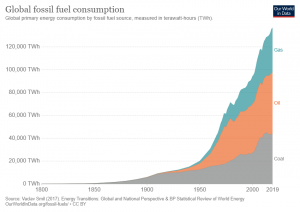 In 2016, the world saw the first united approach to combatting global warming with 196 countries signing the Paris Agreement. This international treaty sought to enact measures seeking a move towards a global “carbon net zero” state by controlling the emission of greenhouse gases.

The Paris Agreement is based on a long-term temperature goal of limiting the rise of global temperatures to well below 2 degrees Celsius. Each country has agreed to specific reduction in greenhouse emission either through reduced use or sequestration of produced gases.

An excerpt from United Nations in Trinidad and Tobago "When world leaders gather in Glasgow, Scotland next month for...
Read More

Trinidad and Tobago joins UK’s 30by30 alliance for marine protection

An excerpt from the Trinidad Newsday Trinidad and Tobago has become one of the latest country to join the Global...
Read More

An excerpt from the Trinidad Newsday European Union through the Global Climate Change Alliance Plus (GCCA+) programme has donated €2.4...
Read More

Trinidad and Tobago’s transition to renewable energy was given a boost today with the announcement of the 12 finalist sites...
Read More

An excerpt from the Trinidad Guardian Newspaper T&T does not have a competitive advantage in producing renewable energy. Hence, the...
Read More

An excerpt from the Trinidad Guardian Newspaper T&T is among 16 countries that have signalled their intention to voluntarily participate...
Read More

An excerpt from the Journal of Petroleum Technology Everyone in the oil and gas industry knows 2020 was a...
Read More

A article in the Journal of Petroleum Technology by Judy Feder discusses how the oilfield service companies, in particular Halliburton...
Read More

An excerpt from the Journal of Petroleum Technology The international supermajor is looking to make Houston and the US Gulf...
Read More
1 2 Next »
Load More ArticlesLoad Less Articles
Menu