Back to News & Events

Recently, Earth Day celebrated its 52nd anniversary on April 22nd, 2022, whereas World Environment Day is celebrated on June 5th each year. Many often think it’s a duplicate niche holiday but each has its own separate origin and focus.

Firstly, Earth Day originated in 1970 and then a few years later in 1972, World Environment Day began. In June 1972, the United Nations (UN) gathered a group of politicians in Sweden to address the growing challenges of preserving and protecting the environment. Later that year, the UN General Assembly responded by forming the United Nations Environmental Programme (UNEP) and designated June 5th as World Environment Day with the goal of raising awareness and encouraging governments to commit towards the environment around important concerns such as global warming, deforestation, and depletion of the ozone layer.

“Only One Earth” is the campaign slogan for World Environment Day, with the focus on “Living Sustainably in Harmony with Nature”. Protecting our biodiversity is an activity that is essential for the health of our planet since all living things are interconnected. For example, deforestation doesn’t just impact the oxygen level in the atmosphere but displaces species from their habitats. Similarly, plastic pollution doesn’t just destroy marine life, but impacts everything from the food chain to the ozone layer. This year’s campaign highlights the need to reset the balance with nature through transformative changes in how we eat, live, work and move around. 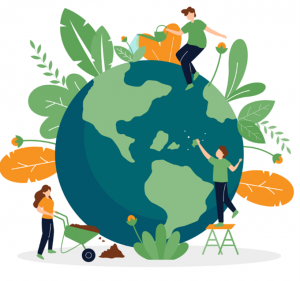 The core focus in the creation of this event is centered on sustainable development, with the theme itself emphasizing that time is running out for our planet. World Environment Day 2022 comes at a crucial time where we are in a decade of action to deliver and meet the Sustainability Development Goals (SDG’s). The United Nations developed the SDG’s framework in 2015 that outlines seventeen (17) sustainability goals and environmental related targets (refer to Figure 1). These goals are designed to end poverty, famine, gender discrimination and protect the planet. While countries continue to strive to meet these goals as part of the 2030 agenda, the creativity, technology, and financial resources from all of society is necessary to achieve the SDG’s.

The World Environment Day campaign helps raise global awareness on climate change, biodiversity and nature loss, pollution, and waste. It highlights the need for action by governments and business organizations to leverage the power and finance that is required for placing the policies and infrastructures towards sustainable living. Aside from governments, youth and civil society must play a key role in advocating for change.

Our planet is currently facing several issues such as climate change, loss of biodiversity, pollution, and improper waste management.

The crisis that we face today are a result of our poor use of the planet’s resources and improper waste disposal. Our demand for resources exceeds the Earth’s capacity to provide them by an estimated 75 per cent. According to (United Nations Environment Programme, 2022, p. 5), people significantly impact nearly three-quarters of land and two-thirds of the oceans; and greenhouse gas emissions must be halved in the next eight years to keep global warming below 1.5°C. There is new evidence that households are associated with two-thirds of all greenhouse gas emissions, and the latest Intergovernmental Panel on Climate Change (IPCC) report shows that sustainable lifestyles and behaviors could reduce our emissions by 40–70 per cent by 2050.

What can we as individuals do to protect the planet?

We must make a conservative effort to heal and protect our planet as well as continue to advance to a more sustainable future. As citizens, workers, students, consumers or in any other roles, our individual decisions shape how our societies impact the environment. We must also transform our personal lives to a more sustainable way of living. As individuals we can support faster and press for more far-reaching environmental change from larger entities like governments and businesses.

Change is difficult but no matter how small it is, even just one simple change can make a positive impact. Here are some actions you can take: